Today was shopping day, so tonight there was fresh fish. In several of my pressure cooker books, there are similar recipes for fish cooked en papillote in the pressure cooker. Somehow cooking fish in a pressure cooker seemed a bit of a strange idea to me, so I wanted to see how it went.

I decided to use the recipe from the recipe book that came with my new pressure cooker. The photo on the cover is actually the photo used for Papillotes de Poisson aux Petits Légumes (p7), although it seems different in some particulars. The ingredients do not include star anise or celery or olives. But, what the heck, the point of this recipe is that it's really a technique and you can do whatever you want with it. 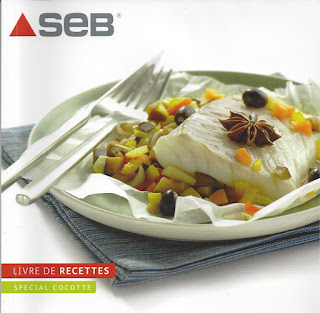 For each person you need a filet of fish (I used lieu noir) and about 50g of vegetables. I'm sure I had more than that amount. I included grated carrots, zucchini cut in strips, and a chopped shallot. I tossed these together with salt and pepper and a bit of a Tunisian spice mix from the cabinet. For each serving, make a bed of veggies on a piece of parchment paper. Lay a piece of fish on the veggie layer, sprinkle with a bit of lemon juice and a drizzle of olive oil. Seal up in packets. (I use staples to close them, which is not very elegant, but works.) Put the packets on a steamer over three cups of water in the pressure cooker. Close it up, bring to pressure, and cook for eight minutes. Release the pressure and serve.

I cut away the top part of the paper from each packet and then slid the fish onto the plate. In the photo you can see one unopened packet and one where the top part has been sloppily cut away. 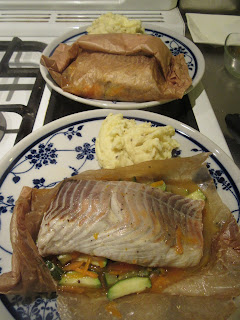 January starts a new year with Cookbook Countdown. Why don't you choose a book, or two, or more, from your cookbook shelf and join in?
Posted by Ed and Kaye at 22:49