One last night with Pat Dailey's The Best Pressure Cooker Cookbook Ever. Tonight we had Chaco Chicken Chili (p75). The headnote suggests it can be make with leftover turkey, and Thanksgiving turkey from the freezer did the job.

Start by soaking a mixture of beans overnight. I used kidney and black beans because that's about all I found that would do. Sauté a chopped onion, two minced garlic cloves, and a couple of jalapeños (shh, mine were red instead of green). Then add a diced red bell pepper (in this case, mine was green), chili powder, ground cumin, and dried oregano. Stir for a minute, then add a can of diced tomatoes, a 12-oz bottle of beer, chopped cooked chicken or turkey, and the drain beans. (The recipe also called for some brown sugar, but I quailed at the idea of adding sugar to a chili.)

Close 'er up, bring to pressure, and cook for 15 minutes at pressure. Longer would have been better, since some of the beans were still a bit crunchy; not inedible mind you, but not the soft texture that that should have been. Taste and season with salt and cayenne. Chopped cilantro can be stirred in at serving time, but there was none at the store last week.

I come from the no-tomato school of chili-making, but this was a pretty darn good in spite of that. 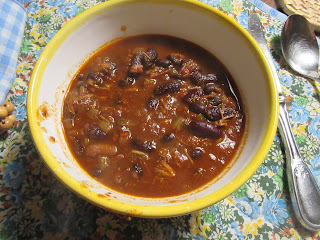 I've learned a lot about cooking with my new pressure cooker in the last month and still have some recipes to try. I never did find a quick dessert, but that may be a fairly vain quest. We've especially enjoyed some of the stew-y things, like this chili and Madhur Jaffrey's recipes, where so much time is saved. We weren't too pleased with the bone-in chicken dishes. Some of them had very nice sauces, but the meat texture and flavor left a bit to be desired. Of all the books I looked at, I think Pat Dailey's The Best Pressure Cooker Cookbook Ever. and Victoria Wise's Pressure Cooker Gourmet will be the ones that stay on the shelf.

January starts a new year with Cookbook Countdown. Now let's see what February brings. Why don't you choose a book, or two, or more, from your cookbook shelf and join in?
Posted by Ed and Kaye at 23:04