We started with Cacik&mdash:Cold Yoghurt and Cucumber Soup (p19) from Turkey, which is a very nice, easy-to-make cucumber-yogurt soup. Grated yogurt is combined with yogurt, white vinegar, olive oil, mint, dill, and salt. (Too much salt, actually. The recipe asks for 1 tsp. I put in about 3/4 tsp and it was still too salty.) The whole recipe should serve two to four; I made the whole recipe and served it for two. These were quite substantial servings; smaller servings would probably be better for a large meal. Sorry, my soup plates weren't chilled, but I did add an ice cube as suggested. 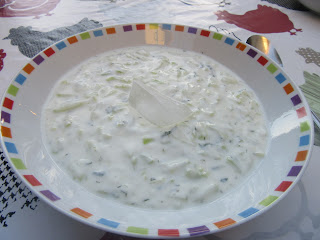 For dessert, there was Paludah—Fresh Melon and Peach Compote (p112) from Iran. I had one very small charentais melon, which tastes and looks much like a cantaloupe. After checking the weight, I made about a 1/3 recipe with a whole peach (i.e., a half recipe's worth of peach). The recipe indicates should  served up to two; I think it would have easily served four. The compote has melon (in chunks rather than balls) and peaches, mixed with sugar, lemon juice, and rose water. A nice combination. The rose water wasn't over-powering as it can be sometimes. 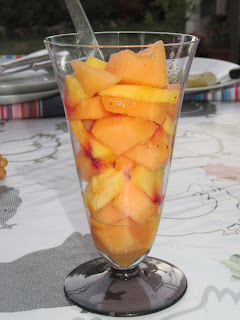 Stop by Cookbook Countdown to see what other folks are making from their September cookbook. And if you've got books on your shelf wanting to be used, why don't you choose one and join in?
Posted by Ed and Kaye at 21:21