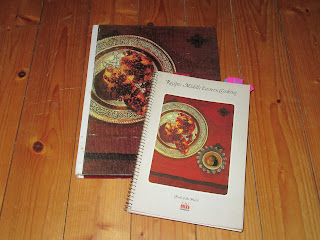 Tonight's dinner was Psari Savori—Fish Fillets with Tomato and Wine Vinegar Sauce (p63), from Greece. The recipe calls for porgy. No idea what that might be in French. Instead I used lieu noir, and which seems to be saithe in English, but that doesn't help me much. In spite of the black in the name, this cooks up as a lovely white fish that we enjoy frequently.

The fish are simply dredged in flour and fried in olive oil. The sauce is what makes this a nice dish. There are peeled, seeded, and finely chopped tomatoes, the first from the potager this summer; a tiny dab of tomato paste; red wine vinegar; finely chopped garlic; a crumbled bayleaf; salt; and freshly ground black pepper. These good things are boiled briskly together until the mixture is quite thick. 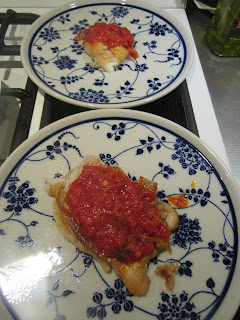 The recipe suggests serving the fish with crusty bread and a green salad, which is what I'd planned. But I skipped a beat as I started cooking and made Salat Znonit Beshament—Radish and Sour Cream Salad (p87), from Israel. I'd planned this for a meal of lamb later in the week (and will make it again, since this was a hit).

The dressing is sour cream, red wine vinegar, sugar, salt, and freshly ground black pepper. This is tossed with thinly sliced radishes and red onion. Simple. Delicious. My only criticism is that there's too much dressing for the amount of veggies, but that's easily remedied. 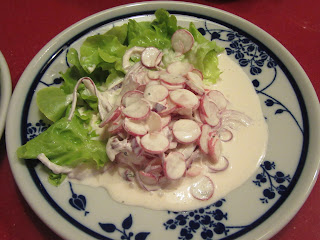 Stop by Cookbook Countdown to see what other folks are making from their September cookbook. And if you've got books on your shelf wanting to be used, why don't you choose one and join in?
Posted by Ed and Kaye at 21:35