A late start to the day and a small meal for the two of us this year.

The starter was Lasagnesandwich met Zalm en Basilicumdressing (web). Directly translated that's a lasagna sandwich with salmon and a basil dressing; clumsy and we need a better name, since this was quite good and would be a nice company dish, easy to assemble and can be done ahead. I made a half recipe with four lasagna sheets, cutting each in half for assembly, leaving squares of pasta. (The recipe actually has you cutting the stacks after assembly, but I think this would be a mess.) The basil dressing is olive oil, lime juice, and basil leaves, buzzed in the blender. First sheet, some smoked salmon with a bit of dressing, second sheet, thin slices of avocado that have been tossed with lime juice, third sheet, more smoked salmon and a bit of dressing, All topped with the fourth sheet. I decorated the top with some leftover bits of salmon and a pretty drizzle of dressing. Very well accepted. 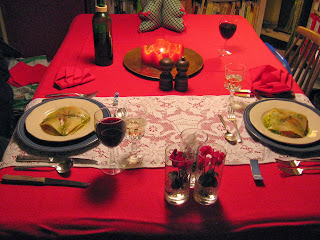 When we went to the market to find something special for our xmas dinner, we had in mind some ostrich steaks or medallions of venison. But the ostrich vendor wasn't there and the venison vendor had only bits of meat for a civet (a stew). So that's what we had. I smerged recipes for Civet de Chevreuil from two books (SaveurFR, p238 and Petit, p625). Actually, chevreuil is roe deer, where my farm-raised venison was daim or fallow deer. The French recipe called for finishing the sauce with pig's blood (or even hare's blood per Larousse Gastronomique); I didn't see any of this at Leclerc and the butcher was closed when Ed went by, so I did without. The result was a very nice, tasty stew. The meat and veg marinated for over 24 hours, then the bits of meat were browned and everything simmered for several hours until tender. And tender and delicious it was. 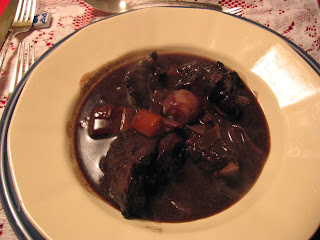 Then we had a cheese plate with small pieces of three cheeses along with a bit of arugula and a plain vinaigrette. There was a tomme de savoie, St Felicien, and Delice du Poitou, a cinder-covered local-ish goat cheese (from the town where we visit the Bach à Pâques festival) with a lovely texture and taste. 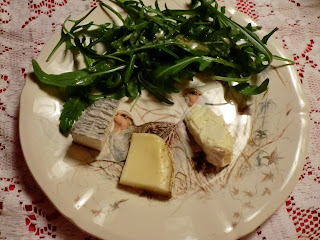 Our dessert was Poire Pochée Chocolat et Vanille (VPG), Chocolat and Vanilla-Poached Pear. This was tasty enough, but nothing special. I bought long, skinny Conference pears, but when I should have bought short, fat Comice. And the chocolate seemed dried out, where it looks like I should have been able to spread it like peanut butter. Not a keeper. 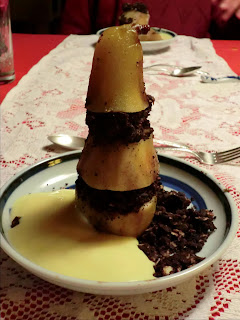 (Ha, I've just found this recipe on the web, but in a version serving 6 rather than 4 as it was published in VPG. The picture in VPG is the same but cropped a bit and reversed. And, assuming the one for 6 is original, the one in VPG was cut back badly. Where there was 250g each of almonds, chocolate, and sugar, VPG has 170g almonds and 135g each of the chocolate and sugar. Now, I don't mind cutting the sugar back, but the chocolate wasn't right. I actually used less almonds, having gotten tired or chopping, and more chocolate but not the full 170g.)

Altogether a tasty and filling dinner, but not too much. And I see we've had the red tablecloth for three xmases in a row now; will try to do something different next year.
Posted by Ed and Kaye at 22:27

It was fun while it lasted, but I'm not really doing any of these cookalongs right now. I might re-consider at some point.

Co-hosted by Joyce of Kitchen Flavours and Emily of Emily's Cooking Foray, this is a group of cookbook collectors who want to make more use their cookbooks. Each month we select one of our books and cook as much as possible for that book.
My posts here.

For six months, we cooked along with Nigel Slater, one of my favorite cookbook authors. I cooked most weeks, but didn't necessarily make a separate post.
My posts here.

For six months, we cooked with Yotam Ottlenghi. I have only one of his books, but there are many on-line recipes to be found.
My posts here.

For six months, we cooked Madhur Jaffrey recipes, with weekly themes to leading the way. I joined in since Jaffrey's cookbooks were already some of my most frequently used.
My posts here.

Hosted by Joyce at Kitchen Flavors, this is a chance to post cookbook selections once a month. I'm aiming to expand my culinary vocabulary by cooking from seldom or never used cookbooks, old and new.
My posts here.

Lead by Rachel of The Crispy Cook), Deb (of Kahakai Kitchen), and Jo (of Food Junkie not Junk Food), every two months we read a food-related book and cook a meal inspired by that book. Nice idea, but I haven't been participating much in this one lately.
My posts here.

Cookbook Sundays
Led by Sue at Couscous and Consciousness, I was posting a recipe from a seldom or never used cookbook each week. The group seems to be defunct now.
My posts here.

Cooking Italy
Led by Angela Roberts of Spinach Tiger, we made a lot of good things from Marcella Hazan's Essentials of Classic Italian Cooking.
My posts here.